A community divided over oil boom

Tuesday 9pm - INDEPENDENT LENS: My Country No More - Documentary -The rise and fall of the North Dakota oil boom, and a look at the long-term consequences of short-term approaches to land use.

They stood for their neighbors when they could have cashed in on their land. Will their choice cost them both?

Between 2011 and 2016, oil drilling in rural North Dakota reached its peak, setting off a modern-day gold rush in the quiet, tight-knit farm town of Trenton, North Dakota, population less than 1000.With billions of dollars to be gained in an industry-friendly state with a “reasonable regulation” climate, small towns like Trenton became overwhelmed by an influx of workers, and countless acres of farmland were repurposed for industrial development. Through the voices of Trenton’s residents,  My Country No More challenges the notion of “progress” and questions the long-term human consequences of short-term approaches to land use, decisions that ultimately affect all Americans, rural and urban alike.

Following the rise and fall of the oil boom in North Dakota, the film paints a portrait of a rural American community in crisis split by a high-stakes divide. 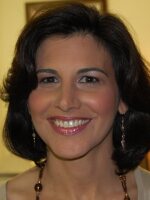 Mia Laurenzo
Mia Laurenzo is a 30-year veteran of public television in Miami. She began her career learning every aspect of video production. Currently she is a writer, producer, on-air host and promotions coordinator for TV, radio and the web. Her experiences include producing for a series, special events and historical documentaries. As a native Floridian, she is a perfect fit for South Florida's Storyteller Station, WLRN. She has produced award winning, nationally distributed documentaries like Journey to the Macy’s Thanksgiving Day Paradewhere one year she followed a high school band and a clown as they prepared for the big day and the next year, she had the privilege of being a clown herself. Previously, she produced Weird Florida: On the Road Again,a sequel to the highly successful show Weird Florida: Roads Less Traveled,where the cast and crew travel over 1,500 miles searching the Sunshine State’s weirdest and wackiest places. On a more serious note and what she considers to be her most important work, she produced Out of Darkness, Into Light, a documentary on child sexual abuse,which delved into the lives of three adult survivors, a show in which she was awarded her first of two Emmys.
See stories by Mia Laurenzo
Latest Stories