As soon as they could after Hurricane Irma, researchers went out onto Florida Bay to see how the estuary fared after its close encounter with a Category 4 storm.

Initially, the news was good. The water was stirred up of course, but it started to clear up quickly. The seagrass beds were still there and the mangrove islands were intact.

“It really looked fine, so we were very surprised, very happy to think that we were going to get away without too much impact to the bay,” said Peter Frezza, research manager for Audubon Florida’s Everglades Science Center in Tavernier.

There was one obvious, and ominous, impact — hundreds of acres of floating seagrass that did not come from the bay itself. 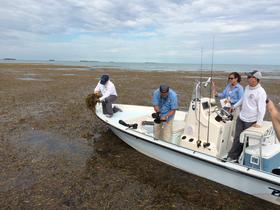 “What we suspect is that the grass was scoured from somewhere else in the Gulf, between the Lower Keys and Florida Bay, and just blew in there,” Frezza said. “We’re talking hundreds and hundreds of acres of floating grass in the bay, mainly consisting of turtle grass and manatee grass.”

In the weeks since those initial surveys, the grass that was floating had time to sink to the bottom and start decomposing. That process adds nutrients to the water.

And the bay was already getting a big dose of nutrients from a rainy South Florida fall plus Irma, all leading to “record amounts of flow through the Everglades watershed,” Frezza said.

That watershed, some of which eventually flows to Florida Bay, includes urban areas and farms — all of which add nitrogen and phosphorus to the water.

The storm stirred up sediments in Florida Bay itself, another source of nutrients. And the bay still had the seagrass that had died after a drought in 2015. Three weeks ago, people on the bay started noticing algae in the places where blooms usually start, in the central and northern sections, Frezza said.

“All the ingredients were in place to form a bloom,” he said. Since those first observations “it is really expanded and currently there’s very little water within the bay that is not being impacted by this bloom to some extent.”

The only areas he’s seen that look “moderately decent or clear of the bloom” is the water close to the Keys, Frezza said. “So water that is heavily influenced by Atlantic Ocean tide, that looks fine.”

Once blooms start, there’s nothing anybody can do to halt them. Scientists and environmentalists say the long-term solution is Everglades restoration, to bring clean water to the bay at the right times.

In the short term, all anyone can do is monitor the water quality — and hope the change of seasons with less rainfall and cooler temperatures knocks the algae bloom down.

Besides just the unpleasant sight of murky green water, algae blooms can have a significant ecological — and financial — impact on the bay, which is the southern end of Everglades National Park and a famous fishing ground.

Blocking the light from reaching the seagrass limits photosynthesis, which can lead to a seagrass die off. Sponges are also “very intolerant” of algal blooms, Frezza said.

“And unfortunately, it’s the sponges that can filter these microscopic cyanobacteria and algae. So with the loss of sponges, it doesn’t help the bloom situation.”

Besides filtering the water, sponges provide habitat for the bay’s normally-abundant marine life. And blooms can also use up the oxygen in the water, leading to fish kills for the small species that can’t move away far enough. The game fish that Florida Bay is famous for rely on those as prey, as do the wading birds like roseate spoonbills, great white herons and others.