In the Southwest Florida region including Charlotte, Collier, Glades, Hendry, Lee, Manatee and Sarasota Counties, health officials have reported 59,584 total cases of the virus and 1,445 deaths since the beginning of the pandemic.

Florida’s Public Service Commission, this week, will decide on a proposal seeking at least a 90-day moratorium on electric service disconnections. Florida’s four major utility companies filed documents at the PSC pushing back against the plan that would halt disconnections for customers who can’t pay their bills.

The utilities point to efforts made to help customers who have struggled as the pandemic has caused widespread job losses and financial troubles. Also, Gov. Ron DeSantis, last week, let expire an executive order aimed at limiting evictions and foreclosures.

DeSantis pointed to a recent order by the federal U.S. Centers for Disease Control and Prevention to halt evictions through the end of the year. DeSantis said he allowed his executive order to expire to avoid confusion with the federal order.

“We have families that are back at work, but they are making a lot less than they used to make,” said Eskamani.

Utilities suspended disconnections after the pandemic began in the spring, but recently have moved forward with plans to turn off electricity for non-payment of bills.

A decision by the PSC to impose such a moratorium would be unusual, but the regulators were told at a July workshop that nearly 600,000 utility customers were behind on payments. Consumer groups also estimate that around 660,000 renters may be facing eviction in Florida.

Gov. DeSantis said closing schools in March at the height of the coronavirus pandemic did more harm to children and did not out-weigh the risk. DeSantis made the comments Friday during an interview with Drew Steele of WSFX-FM in Fort Myers.

DeSantis said he supports parents who chose to home-school their children. He also recognized parents' need to return to work, but he said keeping children out of school hurt them both academically and socially.

“Taking away face to face instruction for them means their kids fall behind tremendously, and not just with academics; social development, all these other things that are so important,” said DeSantis.

DeSantis also questioned the motives of some who pushed for schools to remain closed.

U.S. Senator Rick Scott, R-FL, corrected himself in a Tweet on Saturday, saying he has not tested positive for COVID-19. The correction came after Scott said he had tested positive during an interview on Fox News on Saturday morning.

The AP reports, Scott made the remarks when he was being asked about some of his Senate colleagues who have contracted the virus including Senators Mike Lee, R-UT, Thom Tillis, R-NC, and Ron Johnson, R-WI.

A rally planned for last Friday night in Sanford was immediately cancelled after President Donald Trump announced he'd tested positive for the coronavirus. Other scheduled events remain up in the air in Florida, which is considered critical to President Trump's re-election.

Emma Vaughn, Trump Victory spokesperson for Florida, said state Republicans will redouble their efforts to get canvassers knocking on doors.

“At this point in the campaign, with less than 32 days out to go, our singular focus is on getting out the vote,” said Vaughn.

“We've had firm health and safety protocols in place since we transitioned back to in-person campaigning, back in June.”

One good thing COVID-19 has caused is increased access to mental health care through telehealth. For many of Thomas Joiner’s patients, their mental health has actually improved during the coronavirus pandemic.

Joiner runs a psychotherapy clinic with patients who are at high risk for suicide. He says concerns about the coronavirus caused his clinic to move to remote work.

“We transitioned all of the appointments immediately in March to telehealth. Surprisingly a seamless transition. And even more surprisingly, their suicide risk, from January to February, went down March to April, and we attribute it to ongoing engagement via telehealth with our clinic.”

Joiner is a professor of psychology at Florida State University.

“And my specialty is suicidal behavior, the prevention of it.”

He spoke during the Children and Youth cabinet meeting chaired by Florida’s First Lady Casey DeSantis.

Outgoing Agency for Healthcare Administration Secretary Mary Mayhew also attended the meeting. She says increased access to telehealth is one thing she hopes will stick around after the pandemic.

“When someone is ready to access treatment, the door needs to be ready to open. And that is the value of telehealth.”

Mayhew says she’s also seen a significant increase in telehealth use during the last several months.

“I completely agree about what we have seen through the Medicaid program in terms of the skyrocketing increase of telehealth, the use of it, providers embracing it and individuals who need access to services being able to take advantage of it. That is a huge benefit to people being able to timely access mental health and substance abuse treatment. The pandemic has been a catalyst for change.”

But Mayhew says it’s important to consider how that level of access can be maintained. Meanwhile, some have raised concerns about barriers to access.

For Joiner, he says that’s something his patients have been able to work through. For example, Joiner says he works with some people who live in more rural areas.

“Of the greater Tallahassee area who may not have great internet access. And we’ve had to trouble shoot with them to get access. But once we clear that barrier, we’ve been very pleasantly surprised about the uptake, the user experience of our students and community members—and again with these very distressed people, thus their engagement with us in the first place, how well that’s gone.”

And Joiner admits there’s no “one size fits all” solution for every patient. But he says the increased access to care that telehealth has provided for his patients has proven to be a major help. 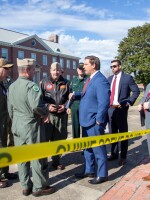 Steve Newborn
Steve Newborn is WUSF's assistant news director as well as a reporter and producer at WUSF covering environmental issues and politics in the Tampa Bay area.
See stories by Steve Newborn