April is Sexual Assault Awareness Month and a project at Florida Gulf Coast University is encouraging people to look at all kinds of abuse using the symbolism of clothes out on a line.

Domestic violence can take many forms: it can be physical, verbal, emotional or psychological, and people of all genders, cultures and socioeconomic classes experience what is known as intimate partner violence (IPV).

Since the start of the pandemic, people have been limited in their movement, with some being confined in their homes with their abusers. Add to that the anxiety of economic hardships because of the same pandemic and it’s not surprising that new data shows a nationwide spike in domestic violence and abuse cases. So a group of women scholars decided to bring a project back on campus.

The Clothesline Project is nationwide and has been a part of Florida Gulf Coast University since 2014. The display includes different colored t-shirts which represent different types of violence. Each shirt was made by either a survivor, or someone who has lost a loved one due to violence.

Sthefania Duque is a senior with a double major in sociology and philosophy. Her study concentration focuses on gender inequality and explores domestic violence from an anthropological and public health perspective.

“I'm very proud. I'm very grateful to have even been considered to be a part of the project.” She said she’s always been passionate about spreading awareness, but this project has allowed her to improve her research skills, in spite of her hectic school schedule.

A collaborative group of women scholars contribute to and lead the project at FGCU, including the Office of Prevention and Wellness, the Department of Social Sciences and students, and faculty and staff in the College of Arts and Sciences.

“It's a massive, you know, women lead discipline across campus offices and students, and it's been really exciting during this isolated, strange year,” said Dr. Mari DeWees, a sociology professor at FGCU. She said she felt drawn to the project because of all the headlines regarding the increases in domestic violence during the pandemic. But she says the conversation can’t stop at headlines.

“There's almost this perception that this is something attached specifically to COVID or that COVID is causing it,” DeWees said. “So, you know, being confined with an abuser for a period of time, and just those things have no doubt exacerbated it, that they're not causal, right? “

Dr. Amy Miller is also a sociology instructor at FGCU. She said it’s crucial to bring attention to the issue.

“It's been important in our project to recognize that, you know, it's not looking at this as being something that women are experiencing, but also looking at looking at it intersectionally,” Miller said. “We have to also look at race, social class position, sexual orientation, migration status, and how those all shape people's experiences, and could potentially make them more likely to be exposed to violence. And so I think that's been a large piece as well.”

Anyone is welcome to create a shirt for the Clothesline Project. 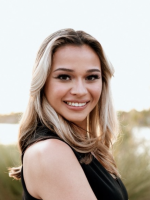